Several years ago my Sister had gone through some old photos and stuff that our parents had and gave my brothers and me a package. When I opened mine, I found some art that I had done as a child. I had forgotten that my Mom had saved anything that I had done back then. I have stuff from high school and college but thought everything was lost from my childhood. Maybe she knew that someday it would be one more thing I needed for inspiration to move forward with my art. She knew I had the potential to be a great artist and that she would pull it out to show people, probably to embarrass me. No. She was very proud of her son and would let people know it. She would tell me, “you are vary talented Mark, don't waste it”. Interesting how I have come back to what I liked as a child. Well maybe it never went away; it just needed to be rekindled. Below is some art that I did  between 1966-1967. 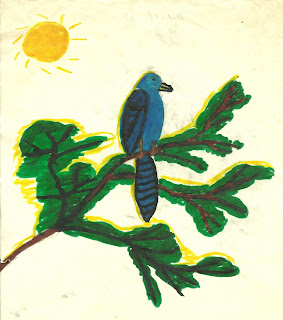 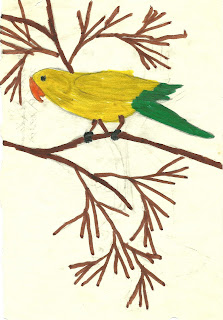 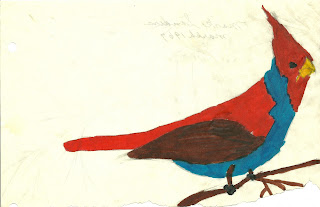 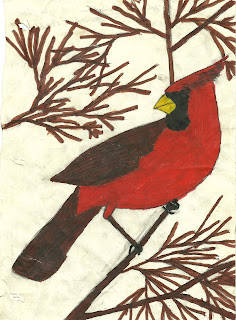 All we did was wad up colored tissue paper and glue it to a piece of cardboard. I remember one time when I was in high school I asked her why she was saving all this stuff. She said, "Because it is special to me"! One day though, when I was about 12, I was joking around with her and made her so mad. As I proceeded to run out the front door laughing, thinking I was being smart to escape her wrath, she threw a piece of plaster art at me that I had made in school (being the closest thing she could grab). The pieces flew past me and disintegrated as they hit the ground; luckily she missed me. I turned around in shock at what she had done and asked, "Why did you through my art at me?!" In her sassy, pissed off voice she said, "WELL, THAT IS WHAT YOU GET FOR PISSING ME OFF"! Never make a woman mad, especially when they are around your art! Another very important lesson learned about women from my Mother!

Posted by MarkSanders at 12:50 PM No comments: