I decided to begin with some background about these three paintings first instead of the one I just completed; you will get a better idea of why I did the latest one. In 1979 my Dad had asked me to do some whale paintings for him. I was just out of college and looking for work, so I had some time on my hands. I know he was trying to get me to do something with my art back then. If I had stuck with it, I would have been a lot further along than I am now. He had an interest in oceanography, and that is putting it mildly. I remember as a kid the whole family sitting down to watch Jacques Cousteau when the specials came on TV or when my Dad took us to either the Bird Rock tide pools or the jetty at Mission Bay to explore. I think that is when I got interested in it myself.

I love the ocean and have always enjoyed getting into the water to explore or just watching the waves. I am definitely an outdoors kind of person and I love to get out and experience nature. When he asked me to do the paintings I was not sure if it was something I could do and I even told him that. To this day I will never forget what my Dad said to me. It wasn’t “try, I think you can” or “see what you can do”, he just said “Yes, you can!” in a soft and confident voice. It was not the response I had expected him to give but it gave me the motivation to do it. He saw the God given talent in me and always encouraged me to never give up on it. Those words have really stuck in my head since my Dad passed away in November of 2009 from Alzheimer's. I owe it to him and everyone else that has encouraged me to fulfill my dream.


I had actually done a smaller painting of the gray whales for an assignment back when I was in college and I think that gave my Dad the idea that I should do some larger ones. It took me three days to do each painting. They are replicas of another artist, Richard Ellis, but with some of my own artistic embellishments. The backgrounds I airbrushed with gouache watercolor paint and then painted the whales on after with gouache and acrylic watercolors. I remember that I had a problem with water getting on my hand when I dipped my brush into the water bucket and it would get on the painting which caused spots on the background. Had I sprayed workable fixatif on it or sealed it with a varnish before I did the whales I wouldn't have had that problem. At first I didn't know how I was going to fix it, I really didn't want to redo the background. So I started to use a cotton glove and then turned the spots into fish. At the time I didn't know that the whales have fish that follow them. I have also learned to keep paper towl around so as to get rid of any excess water on my brush's and to use a piece of heavy paper to lay down on areas that I have already painted. Every time I look at them I am amazed at what I did. They were my first attempt at that size of a painting, both 22” X 28”. That was probably another reason that I was not sure of doing them when my Dad asked me. He might have even said to me, “paint them as big as you can”. If he had had his way I would have done them on the walls in the house and I think he did say that.


The Humpback whale painting is now in Hawaii at my Aunt’s home. I took the painting over there as a gift in 2007 before my Uncle passed away; it was my last trip to Hawaii before I had my heart attack in 2008. I had been traveling to the big island every year since 2003 and wanted to do something nice for allowing me to stay at their home. One day my Uncle was proudly showing it off to some neighbors that had come by and I remember how special I felt when he did. He was a lot like my Dad. It reminded me of how my Dad used to show off both of the paintings whenever someone came over. He would say, “Look at what my son did”. I would try to look nonchalant and be cool, like it was no big deal. Every person would say, “You should be doing that full time!, or “what would it cost to paint me one?”. My Uncle and Aunt helped me at a time when I just needed to get away from San Diego and recharge my batteries. I can’t think of a better place for the painting to be now.


The Gray Whale painting I had given to my Sister but it is now back in my hands. When she and her family moved to Texas they couldn't take it with them. When I originally gave it to her she started to cry. The Sunday before my sister and her family moved to Texas, I went to their church with them. The preacher’s sermon was about, “what were you born to do?” What is your dream? What are your talents? And what are you doing with them? Something that seems to be happening to me a lot lately and that I do think about from time to time. My sister looked at me and said, “Ya Mark”! Was it coincidence? Maybe. I believe that things happen in our lives for a reason. It is what we do about it that matters. A singer on the radio station that I listen to a while back made a comment about one of his songs, “God doesn't care about where you have been! He cares about were you are going”! I believe that is true in every aspect of our lives! The paintings are special to my family and I because of what they meant to our Dad. When we look at them, they remind us of him more than the fact that I actually painted them and I like that. Time to get back to it and paint some more!

Posted by MarkSanders at 10:57 PM No comments: 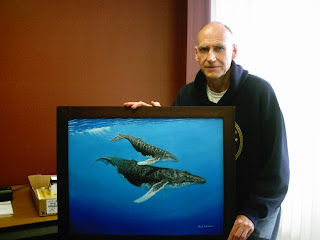 I am finally getting back into painting, wow! Maybe the best way for me to describe it is finding that long lost love and never wanting to let go again. You know you are going to have to work hard at it, “really hard”, in order to keep it this time but the rewards will be worth it. Painting again has been a lot of fun for me and I have learned some new things as usual. Yes, there have been frustrations and times when I just want to give up on it, but I've stuck with it. I had to keep telling myself, “You can do this Mark, don't give up” My mantra is, “YES YOU CAN” something my Dad said to me a long time ago when he asked me to do some paintings for him and it has just stuck in my mind since he passed away in 2009. I do not want to give up on my dream this time and I can't. I would be lying if I said I wasn't downright scared because I know I have to promote myself at some point and it is not one of my better qualities; writing isn't either! And I am, well, somewhat intimidated by doing this blog. I have had a lot of support and encouragement from family and friends over the years and I owe it to them to keep at it. Time to take that leap of faith and step out of my comfort zone! I owe a special thanks to Jennifer Wheeler for her help in the “editing” of my thoughts for here and my web site. Thank you dear! I hope you enjoy my blog and that you will learn and be encouraged by it as well as I do also from those who comment on what I post.
Posted by MarkSanders at 1:21 PM 4 comments: