Finishing what I started part 3

I am finally getting back into the studio to paint. My job has been keeping me busy lately and by the time I get home I don't feel much like doing anything! I was starting to get frustrated with myself for not painting. Over Thanksgiving I was determined to do something on this piece, even if it was not much. Last year flew by so fast and I am nowhere near where I should be or want to be with my art. My goal was to have this painting, along with others, done by now. There are two shows this year that I hope to be in, but it is not going to happen if I don't paint!

I decided to focus on the above water scene before finishing the whales, which is what I should do anyways. That part of the painting was not set in stone and I came up with a couple of ideas as to what I might do even as the painting progressed. In the beginning, the rough sketch I did for this piece included painting in some clouds and an island off to one side. Then I thought of doing a panorama scene that would show the Hawaiian islands of Maui, Molokai and Lanai. I spent about a month looking at so many photos of the three islands trying to piece together what I thought might look good. But it was just not clicking for me. The size of this painting is 18” x 24” and the area it would fit in is only three inches high by the width of the piece. I finally decided that a larger painting would do more justice to that idea. So I have put it on my “to do” list (which keeps growing all the time). The idea I settled on was a South Pacific island scene. While looking for reference material for my last whale painting I came upon a site on the internet for a whale watching adventure tour to the South Pacific islands of Tonga. They say they are the only place in the world where you can actually swim with Humpback whales, up close! And yes it is on my bucket list now!

After acquiring some reference photos, it was time to get to work. As usual, at first I was a little gun-shy about starting but once I did, things began to click. I painted a couple of islands and then started to do some clouds. I like where I am with the piece so far but I am also somewhat worried that I am trying to do too much with the above water scene, sounds like an oxymoron doesn't it? I want people to focus on the whales and not the sky. I am kind of at the same point I was with the bird painting I did last year. I thought about toning it down a bit but knowing me I will probably keep going in the direction I am! I do like detail in my work! People loved the sky and the bird as well in my last painting so I need to stop worrying about it. It feels good to get back to painting. Something I need to be doing! This piece is finally at the point where it is starting to come together and that has me excited right now. The motivation may be back but I need to stay focused on it and get it done! The San Diego county fair is four and a half months away and that time is going to fly by before I know it. Time to become a monk in the studio again! 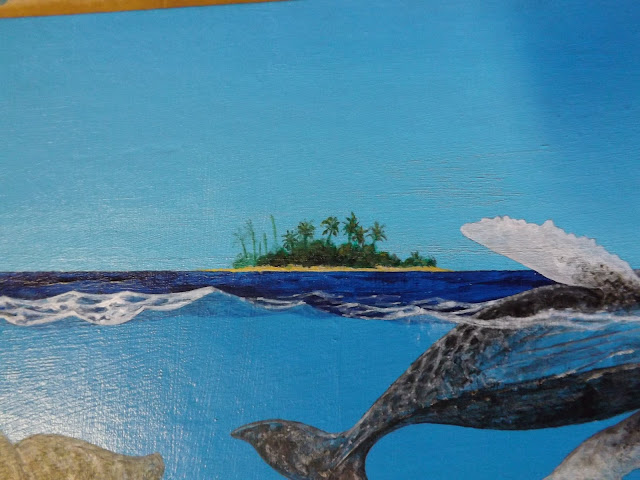 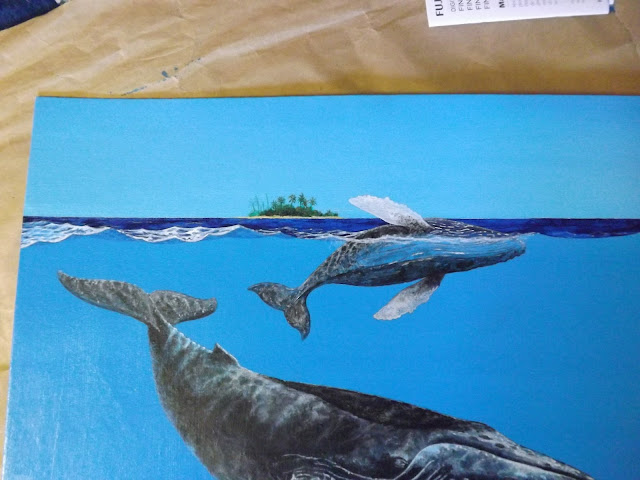 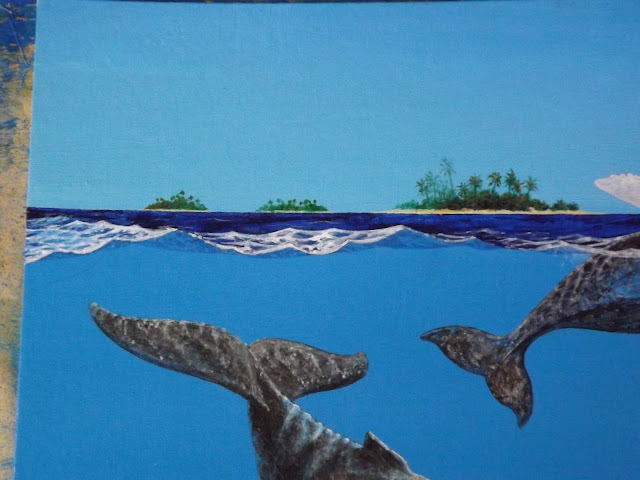 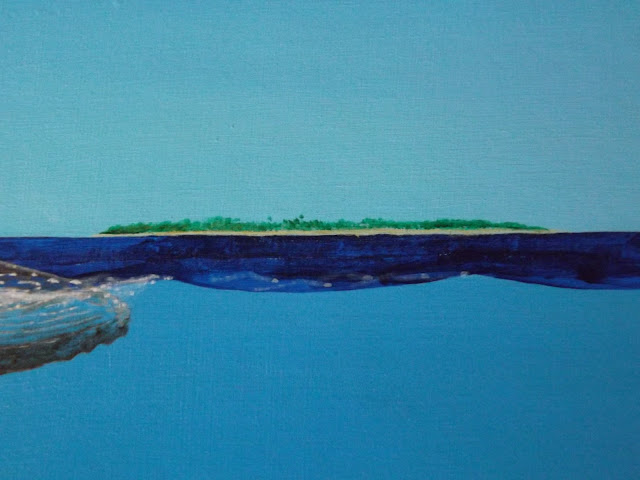 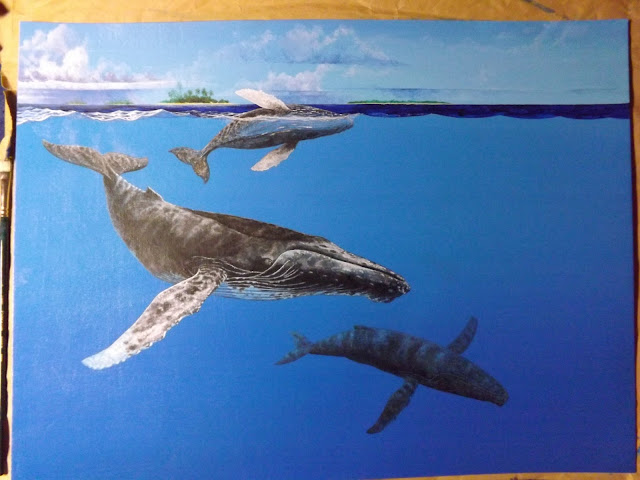 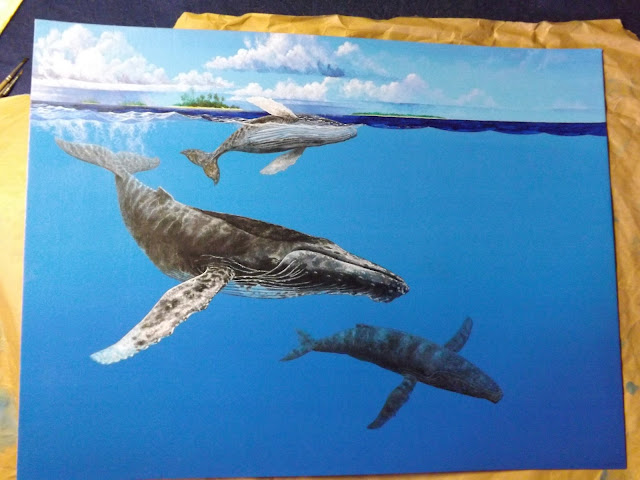 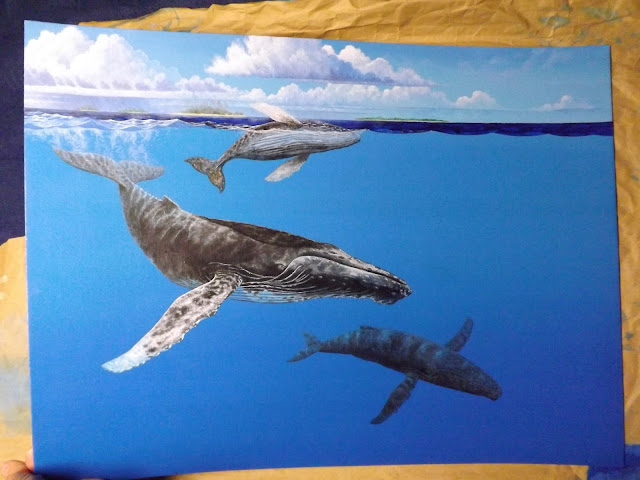 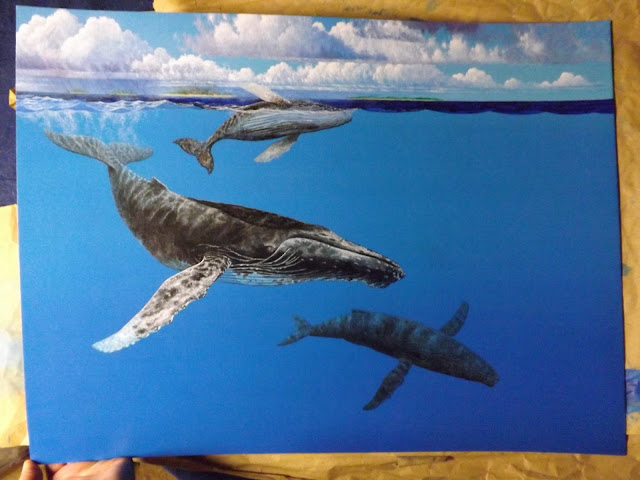 Posted by MarkSanders at 4:24 PM