Last month after completing the painting for the San Diego Co fair fine art exhibition, I began work on three more paintings. This piece has been my main focus because of another art show that is coming up in August. I wanted to enter something last year but did not have anything ready. It is not a big painting, only 9” X 12”. I felt that a smaller piece would be easier to complete in time to meet the dead line for the end of July. The picture I used was one I had taken at La Jolla shores on New Years Eve. I was able to get off work early so I decided to go their for a walk and I am glad I did. I have been wanting to do some paintings of shore birds and since these little buggers where out and about, I took as many pictures as I could get of them. It was not easy because they don't like to sit still for vary long. My goal is to do some more paintings using the photographs I took that day.

I started out by painting the whole board to represent the color of the sand that is just under the water. After a couple of tries with different browns I ended up using a mix of Raw Umber and Unbleached white and let it dry overnight. 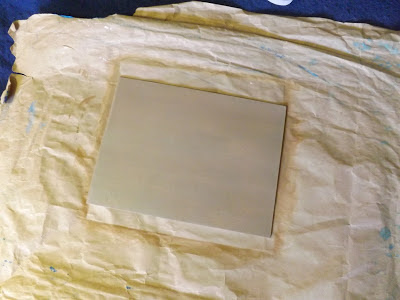 Next I painted over that with a wash of Cerulean Blue and Titanium White for the water. It was not quite matching the color of the picture. So I added some Alizarin Crimson to the mix. It still took a couple of layers of thinned down Titanium white in the end to finally get the color to look right. Each layer I did I let dry overnight before proceeding with the next one. 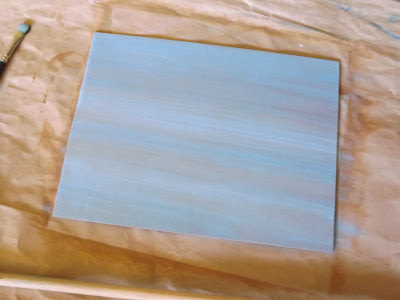 Once the background was done it was time to start painting the bird. As usual I began with a basic outline and then proceeded to add color to define it. things went pretty smoothly for me but I did come to the point that I told myself to stop and move on. It did seem easier to do with this piece. Maybe I am getting better at that! 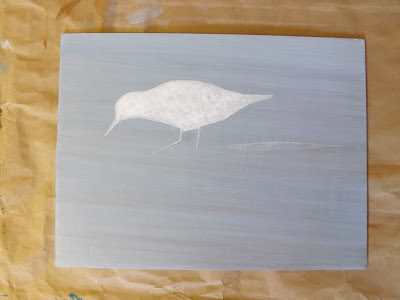 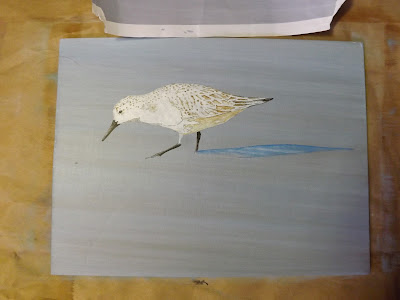 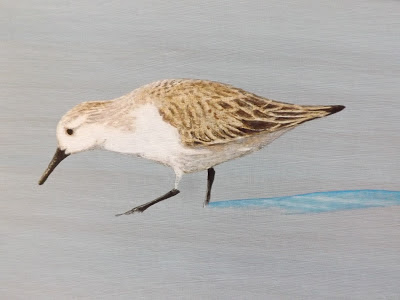 The big white spot just below the bird was a gouge on the board that I was trying to repair. I should have fixed it before I started. You can still see it a little bit. Oh well, it adds caricature to the piece. 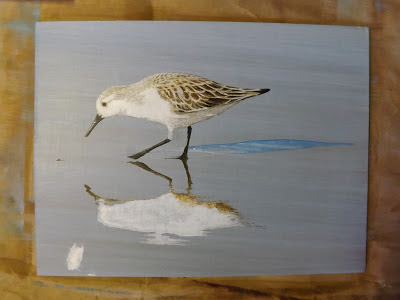 The reflection was an area I was apprehensive about attempting even before I started the piece. And yes everyone, I doubted my abilities again! Once I did stepped out and just do it! It was not as difficult as I thought it was going to be. Still, taking that first unknown step can be scary some times!  As they say, "Faith is like a muscle, you have to exercise it to get stronger"! 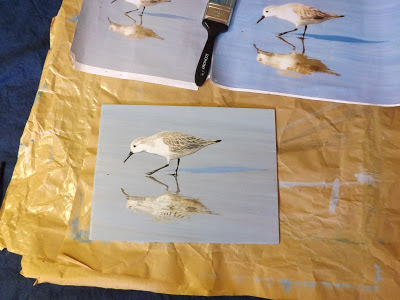 The whole time I worked on this painting I used a method of doing a little work, let it set overnight and then come back and see if I need to change anything. I even took the painting into work to get some different lighting and it really helped with the progression of the piece. Monday night I put the finishing touches on the painting and I guess I still can't believe it is done. I have been going over my, “to do list” and it is exciting to be checking things off. Still have a month before the deadline. Maybe I should do another one.

Posted by MarkSanders at 12:18 AM No comments:

My whale painting was excepted into the San Diego Co fair and I won an Honorable Mention in Acrylic, Rep., Animals. To be honest I am more excited with what I received this year than the first place award for my bird painting last year. I am vary thankful and honored to be in the fair again with another painting. I had a lot of fun at the artist reception held on June 6th. Ran into an old friend of mine that I have not seen in a long wile. He also had a piece in the fair in the mixed media class. Talked with some artist and one of the ladies that is in charge of the fine art exhibit. But it is time to put the fair behind me and get ready for the next art show.

Posted by MarkSanders at 11:45 AM No comments: